Sea containers are large metal crates that allow for safe transport of a material called general cargo, i.e. goods in the form of small packages, in cardboard form, in bags or on europallets. They are used both in sea and rail transport. They are durable and solid, which is why they have enjoyed lasting fame for years. Although they look inconspicuous, you can transport practically anything in them, and in addition, recently their fashionable function is to use them as cheap and easy to build houses. So, let’s present the most important features of sea ​​containers – construction , history and methods of use.

Transport container – will be built

The first containers appeared at the beginning of the 20th century. In 1906, a metal box was used for the first time to transport small materials, and over 20 years later, the luggage of passengers traveling between London and Paris was transported in the same way. In Poland, the first developed container appeared a year after the end of World War I and was constructed by Lt. Col. Stanisław Rodowicz.

With the development, the demand for goods increased. Transporting them, especially over long distances and in large quantities, has become tedious. So the demand for sea ​​containers also increased , the construction of these huge metal crates has increased to a global scale. Full-length tankers appeared, the sole task of which was to transport as many goods as possible. In 1956, the tanker was converted into the first container ship that meets today’s standards. It was then packed with 35 large crates and transported by sea to Houston.

Metal crates are used to transport many small goods at once, so they must be solid and resistant to weather conditions. The base and corner posts form the basis of the shipping container. Their construction is thought out not only in terms of durability, but also the efficiency of loading goods. 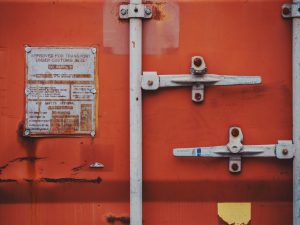 So what does such a container consist of? First of all, a solid base and side walls, as well as a steel frame supporting the entire structure of the container. The frame is a specific skeleton of our metal box and is made of a special trapezoidal sheet, which perfectly supports the weight of the structure. The container is also equipped with corner posts for maneuvering the container, i.e. for fixing it, lifting it and lowering it. In addition, these metal boxes are equipped with a heavy front door, properly sealed to provide adequate protection against the harmful effects of external factors, mainly water, temperature and wind on land. The doors are heavy and built to safety standards and are usually opened from the ground and fitted with five crossbeams for strength.

What other equipment should also have sea ​​containers? The construction of these huge boxes should of course end with the roof, on which nothing should be loaded. In addition, some containers have recesses in the floor, called pockets. They allow for convenient handling of containers with a forklift. Another additional equipment is the so-called gooseneck, i.e. a hole, a recess at the bottom of the structure, thanks to which the container can be lowered on the trailer at any, but limited angle.

The most commonly used sea container is a general purpose container. You can transport practically everything in it, and additionally, when properly modified, it is suitable as a method of transporting loose materials and liquids using flexitanks. This form is often used due to the significantly lower costs than those that have to be incurred when transporting liquids by means of standard tanks. The universal container is available in three capacity versions and can be from 30 to about 77 cubic meters.

There are also open-top containers. It is a specific type of container covered with a roof made of a waterproof tarpaulin. It is used for the transport of materials that are much larger than the walls of the box and which, for technical reasons, cannot be loaded safely through the container door. The goods are placed in the container by a crane. Due to its specialized use, the prices of transport with this type of container are much higher compared to those of general purpose.