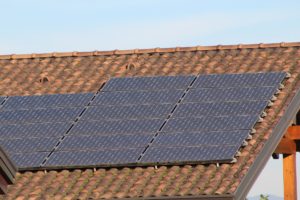 The use of solar energy is becoming more and more popular. Photovoltaics is the process of converting sunlight directly into electricity. The photovoltaic (PV) effect was first observed in 1839. However, it wasn’t until 1954 that scientists were able to discover exactly how it works.

How does the PV process work?

The anti-reflective coating on top helps the cell capture as much light as possible. A semiconductor (usually silicone) is placed between the negative conductor at the top and the positive conductor at the bottom. Once the photons are intercepted by the solar cell, they will begin to emit the outer electrons of the atoms in the semiconductor. Negative and positive conductors create a path for electrons and an electric current is generated. This current is sent to conductors that capture the direct current. These wires lead to a solar inverter, which then converts it into AC that is used in homes. The more solar cells installed, the more electricity is generated.

How are solar panels installed?

Solar panels are made up of many solar cells. The number and type of solar cells used depends on the voltage required by the solar panel. The panels are installed in a way that allows them to absorb as much sunlight as possible.

First, the type of panel you want to install is selected. Traditional solar panels are the most efficient. However, they are larger and heavier than the other two types. Thin film photovoltaic panels are lighter and cheaper than others, but are generally less efficient. It is usually installed on residential buildings.

After selecting the type of solar panel, you need to decide which location will be the best. Installers will analyze the sun’s path to choose the right place. Ideally, the panels should be facing south and not shaded. Then they absorb the most sunlight during the day.

Almost 90% of the world’s photovoltaics are based on some variation of silicon. When used in PV, it takes many forms. The main difference is the purity of the silicon. The more closely matched silicon particles are, the better a solar cell will convert energy from the sun (sunlight) into electricity.

The efficiency of solar panels goes hand in hand with cleanliness. However, the processes used to increase the purity of silicon are expensive. Performance shouldn’t be your primary concern. In fact, cost and space efficiency are decisive factors.

The first panels based on polycrystalline silicon were introduced to the market in 1981. The crude silicon is melted and poured into a square mold which is cooled and cut into perfectly square pieces.

The deposition of one or more thin layers of photovoltaic material on a substrate is the primary method of producing thin-film solar cells. Depending on the technology, prototypes of thin-film modules achieved efficiency between 7-13% and production modules around 9%. It is expected to increase to 10-16% in the future.

Solar panels made of amorphous silicon

It is the only thin film technology based on solar panels to surpass the cost-effectiveness of crystalline silicon panels. The efficiency of the panels is usually 9-11%.

Compared to other thin-film technologies, they showed the greatest potential in terms of performance. They contain a smaller amount of toxic cadmium material that is found in these cells. Commercial production of copper panels started in Germany in 2011.